Whooping cough, which is also known as pertussis or the hundred day cough, is a described as a highly contagious bacterial infection of the lungs and airways, caused by the Bordetella pertussis bacterium, which infects the lining of the airways – mainly the windpipe (trachea) and the two airways that branch off from it to the lungs (the bronchus/bronchi).

Onset of symptoms or first stage of infection is usually a persistent dry and irritating cough.

Other symptoms may include

If the bacteria make contact with your airways, this leads to the second stage of infection:

People with whooping cough are infectious from six days after exposure to three weeks after the “whooping” cough begins (incubation period). It is thought that the bacteria is passed from person to person by infected droplets in the air (coughing/sneezing).

If whooping cough is diagnosed during the first three weeks (21 days) of infection, a course of antibiotics may be prescribed, which is primarily done to prevent the infection being passed on to others (especially to young babies under 6 months of age that are thought to be particularly vulnerable).

When children are admitted to hospital, they may be treated in isolation and antibiotics may be administered intravenously (drip), as well as corticosteroids to help reduce the inflammation/swelling in the lungs (alleviates breathing issues). Extra oxygen may also be given via a facemask, and a bulb syringe used to suction away excess mucous which may be blocking the airways.

The cough is thought to be far less severe in adults and older children. Post 21 days of infection, the GP may be less likely to prescribe antibiotics. Additional advice includes:

Children with whooping cough should be kept away from school or nursery until either:

The same advice applies to adults returning to work.

Over the period of 2 months or more, fewer and less extreme bouts of coughing will occur.

Complementary to any medication you may choose to give / take, please consider the following list of homeopathic remedies to help relieve the symptoms. There may well be other indicated remedies, but these are some of the most commonly used. As mentioned further down in the post, ideally you would have the support of your own homeopath, but I am aware that this may not be available to everyone, and hence my desire to list these remedies for you. 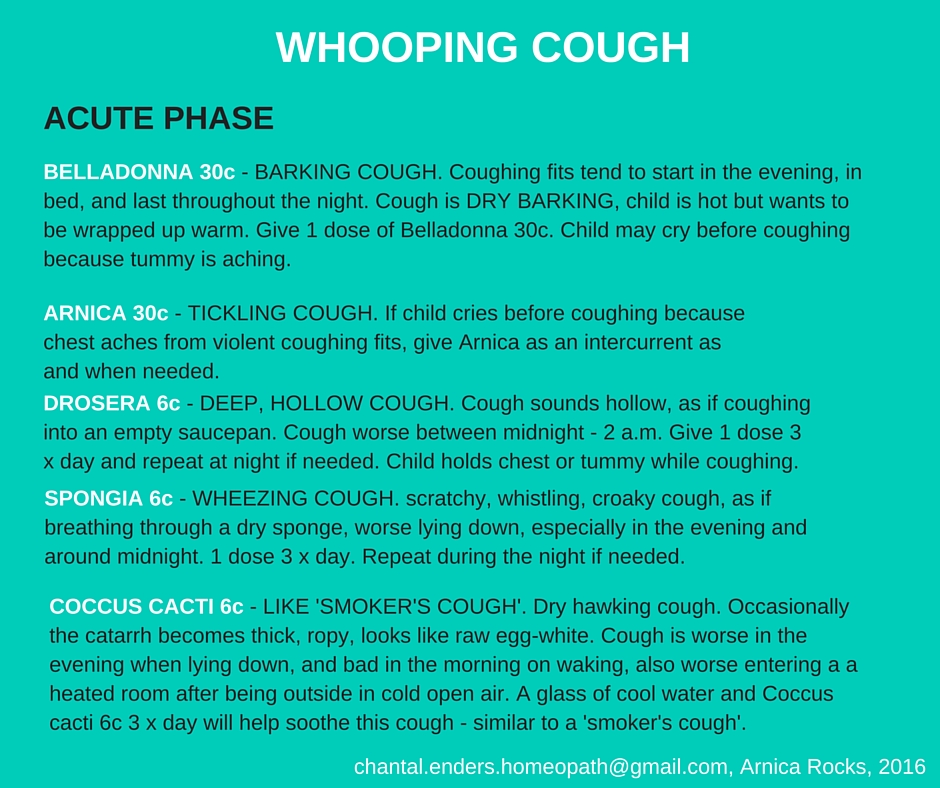 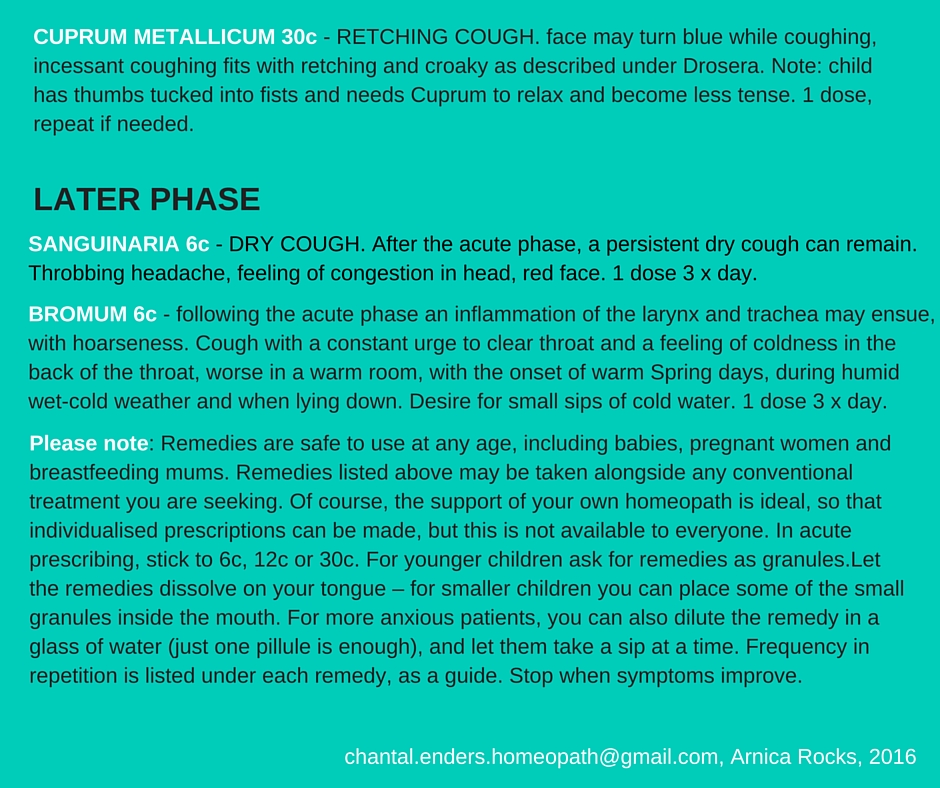 I am not a qualified herbalist or aromatherapist, but you may like to use herbs or essential oils alongside the homeopathy. Personally I use Neal’s Yard, as they sell loose herbs, have a range of tinctures and most of their essential oils are organic. There will of course be other brands available and your local health food shop is likely to stock a variety of Elderberry products.

I also like to use the following WALA product, to rub on the chest and back, but it can be quite expensive unless you can get it on prescription. 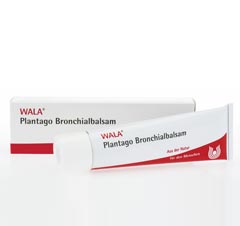 “Coughing is a useful reflex: it clears the airways. However, when you have a cold, a cough can becomes stubborn and painful and refuse to go away. The medicinal plant extracts and essential oils in WALA’s chest rub Plantago Bronchialbalsam* alleviate coughing fits, dissolve thick mucus and hence facilitate expectoration. When applied to the chest and back this balm forms a gentle, warming shield. It soothes irritated mucous membranes and eases the troublesome urge to cough, without suppressing expectoration. Gentle relief that soon has you breathing freely again.”

On the following page, I will have a look at the whooping cough vaccines that are offered in the UK.

Below is an infographic found online, which, apart from suggesting the vaccinations helped reduce the occurrence of pertussis, claims there is a rise in whooping cough among older patients as immunity is thought to wear off as we grow older. 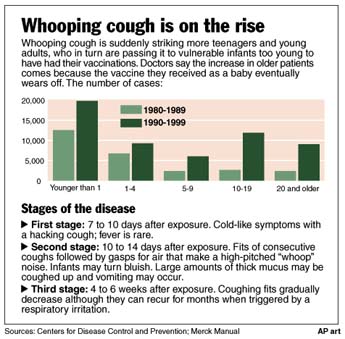 Since October 2012, pregnant women are given the whooping cough vaccine after the 20 week scan, and ideally before 32 weeks, although the NHS website says it can be given up to the point of labour, as it is thought to protect their unborn child during its first few months of life. However, as of 1st April 2016, the vaccine will be offered from 16 weeks onwards – “Offering maternal immunisation earlier than the current 28 week recommendation should not only improve infant protection, it will also provide more opportunity for pregnant women to be offered the pertussis vaccine during pregnancy”.

Some women have questioned the use of the Boostrix IPV/Repevax vaccine during pregnancy as the package insert states that its safety has not been tested on pregnant women. The NHS website says that the benefits of the vaccine outweigh any risks, and that it is standard practice for medicines not to be tested on pregnant women – “This is why the manufacturer’s information leaflet includes this statement, and not because of any specific safety concerns or evidence of harm in pregnancy” – despite this statement claiming there are no safety concerns, the fact remains that they cannot be 100% certain as the vaccines remain untested.

Here is the link to the package insert www.medicines.org.uk/emc/medicine/28679 and an extract from this:

Here is an extract of the ingredients list for the Boostrix IPV vaccine:

I tried to find more information on ‘in VERO’ cells and it seems it means they are ‘host cells’ for growing the vaccines – http://au.gsk.com/media/217186/boostrix_ipv_pi_005_approved.pdf

For the Boostrix IPV vaccine the following info is given “The manufacture of this product includes exposure to bovine derived materials” – other vaccines include the use of African Green Monkey cells (influenza vaccine) http://www.ncbi.nlm.nih.gov/pmc/articles/PMC190510/.

Please also be aware that this is NOT a single pertussin vaccine, but that it contains, tetanus, diphtheria and polio (inactivated) as well. On top of this pregnant mums are also offered the flu vaccine, so that makes 5 vaccines in pregnancy.

If you would like some more info here is another link – scroll down through the news items http://www.jayne-donegan.co.uk/news

Children are vaccinated against whooping cough with the 5-in-1 vaccine at 8, 12 and 16 weeks of age, and again with the 4-in-1 pre-school booster before starting school at the age of about 3 years and 4 months.

I hope this information has been helpful for you. Here is a link to my website www.arnicarocks.co.uk

There seems to be a lot of concern/anxiety on social media about the rise in scarlet fever cases. Newspapers are reporting a higher rise than normal in the number of cases reported(NHS website states they are unsure of the reason why). According to gov.co.uk scarlet fever is a notifiable disease, meaning health professionals must report each case (www.gov.uk/government/collections/scarlet-fever-guidance-and-data).

The first symptoms of scarlet fever are:

12 – 48 hours after the onset of these symptoms a characteristic fine, sandpapery rash will appear. Often it starts on the chest or stomach, but can spread to other parts of the body (ears/neck). The rash may be itchy. On darker skin, the rash may not be that visible, but it should still feel characteristically ‘rough’ when touched.

Scarlet fever is a bacterial illness and could be triggered by a sore throat or skin infection (impetigo) which is linked to particular strains of streptococcus bacteria.

The first symptoms develop 2 – 5 days after infection, though the literature suggests that the patient may already be contagious before symptoms appear. The incubation period (the period between exposure to the infection and symptoms appearing) can be as short as one day, or take up to seven days.

It is most common amongst children between the ages of 2 – 8 years old, but can affect any age group. There is no evidence to suggest that this infection causes a risk to pregnant women or their baby, however any concerns should be discussed with your doctor/midwife.

Although scarlet fever is usually a mild infection, the NHS website recommends a 10 day course of antibiotics (liquid amoxicillin or penicillin for children), although recovery tends to start after 4-5 days. Children are said to be infectious for 24hrs after starting the antibiotics, and 1 – 2 weeks without antibiotic treatment. Doctors believe the antibiotics will help avoid complications such as ear infections, sinusitis, a throat abscess and possibly pneumonia.

Once you have had scarlet fever once, it is unlikely you will catch it again (though there are some exceptions).

Alongside any conventional treatment you may consider, homeopathic remedies will be of great support. Remedies are safe to use at any age, including babies, pregnant women and breastfeeding mums.

The following are a list of remedies you may find helpful. Of course, the support of your own homeopath is the best scenario, so that individualised prescriptions can be made, especially to boost the patient’s overall vitality, but this is not always available to everyone.

Potency-wise in acute prescribing, stick to 6c, 12c or 30c. Remedies can be bought from Neal’s Yard Remedies shops, some of your local pharmacies or Homeopathic pharmacies such as Helios and Ainsworths, which will take your orders over the phone and send remedies out to you. For younger children you can ask for granules, otherwise remedies come as sucrose pillules, lactose tablets or even as powders. Let the remedies dissolve on your tongue – for smaller children you can place some of the small granules inside the mouth. For more anxious patients, you can also dilute the remedy in a glass of water (just one pillule is enough), and let them take a sip at a time. Frequency in repetition is listed under each remedy, as a guide. Stop when symptoms improve. 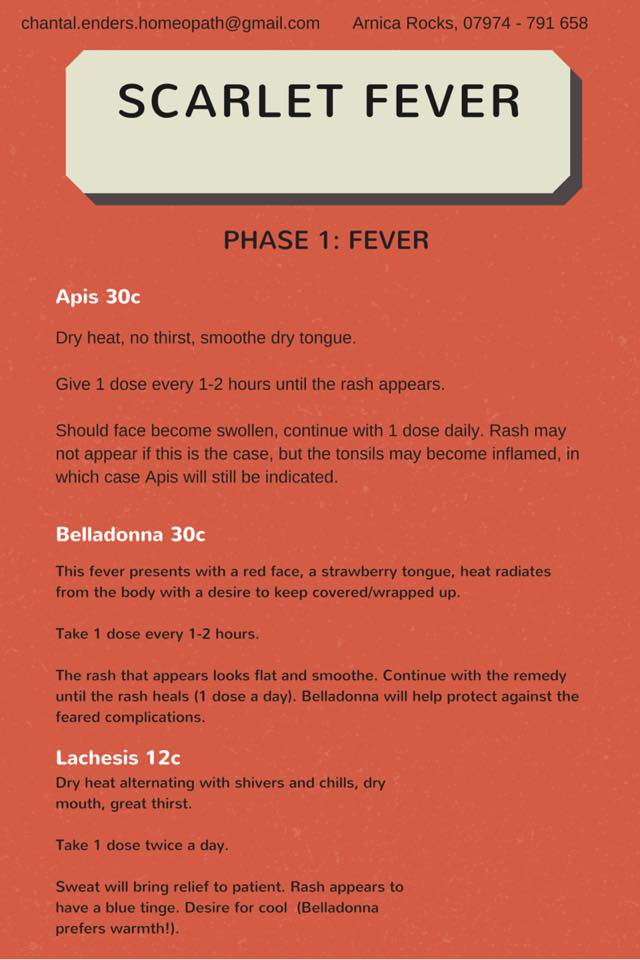 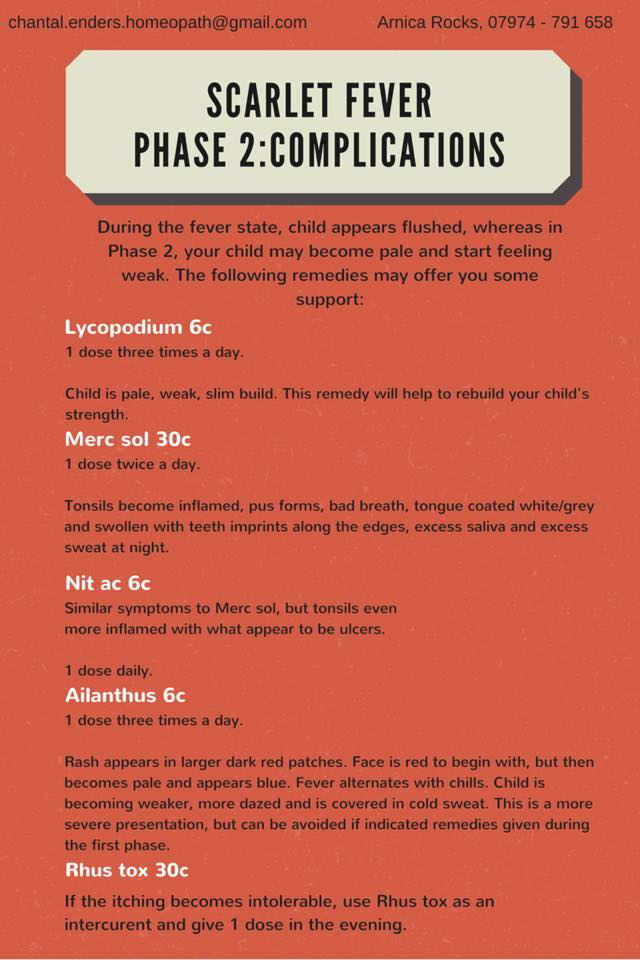 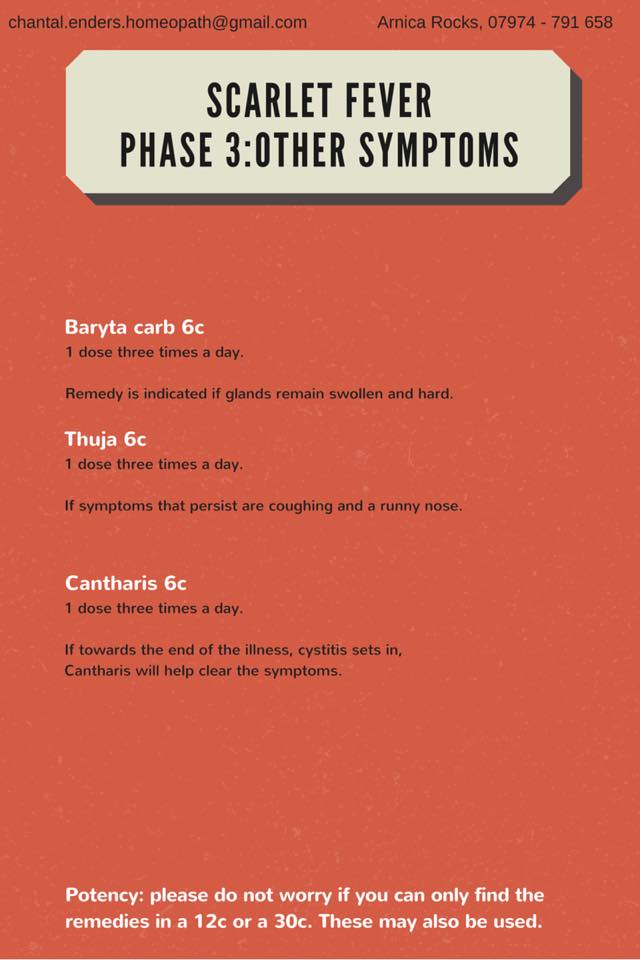 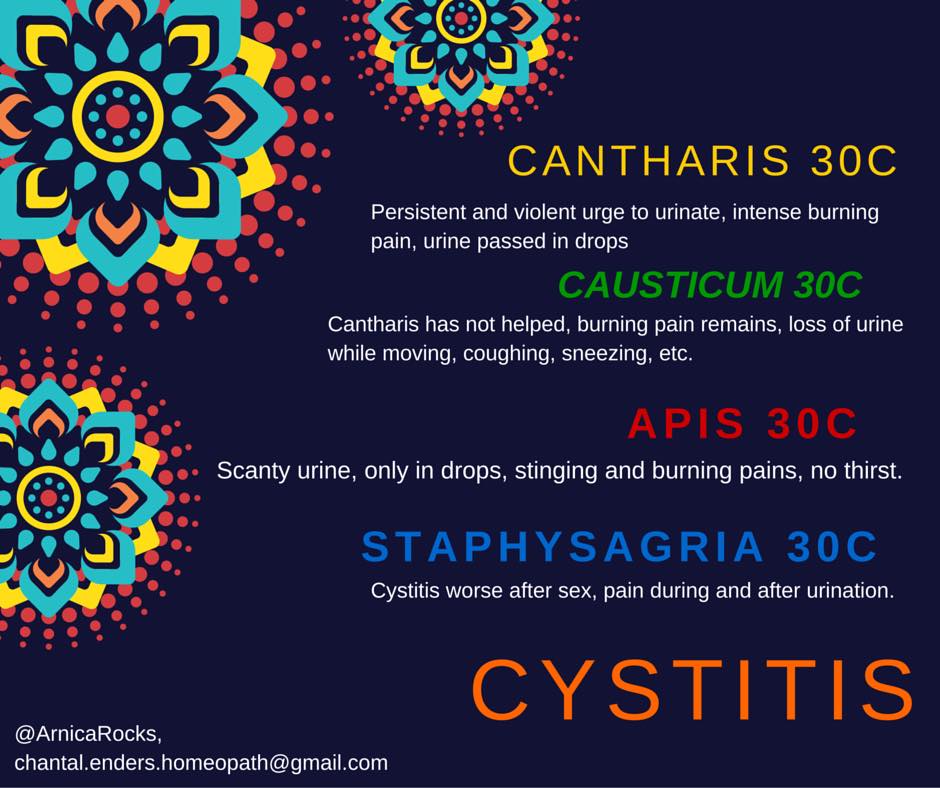 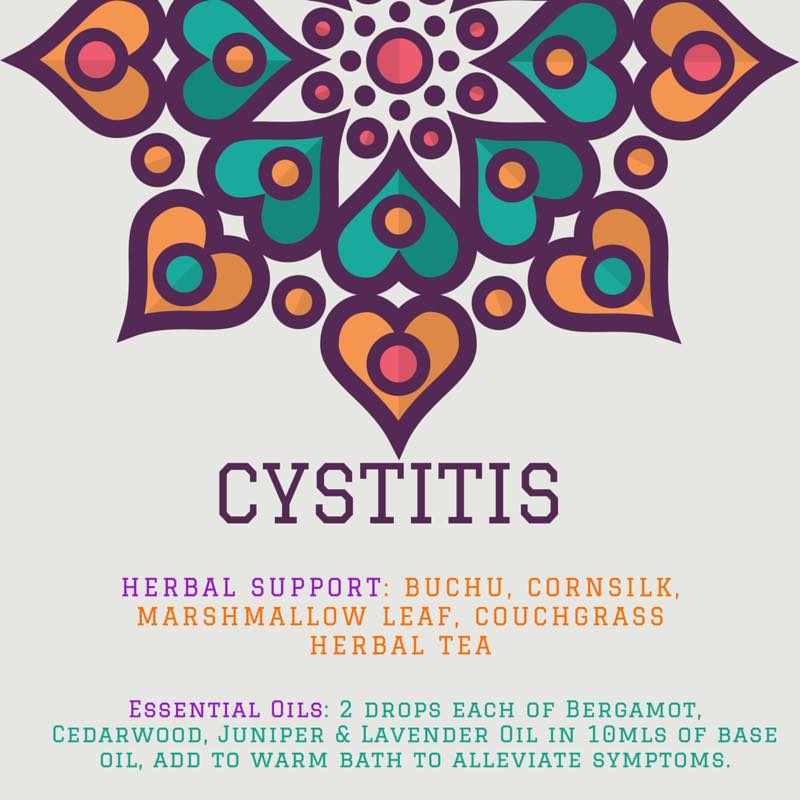 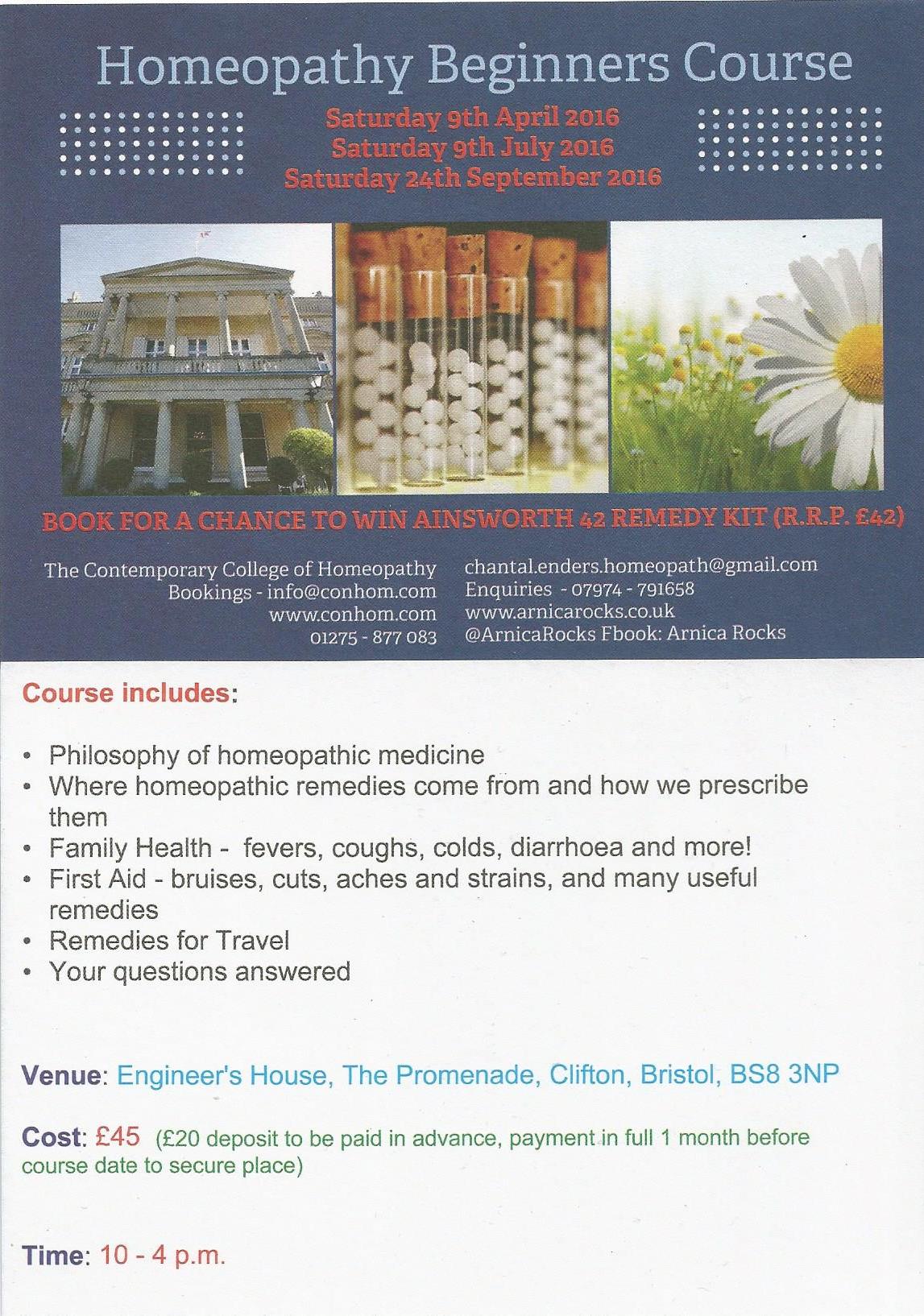 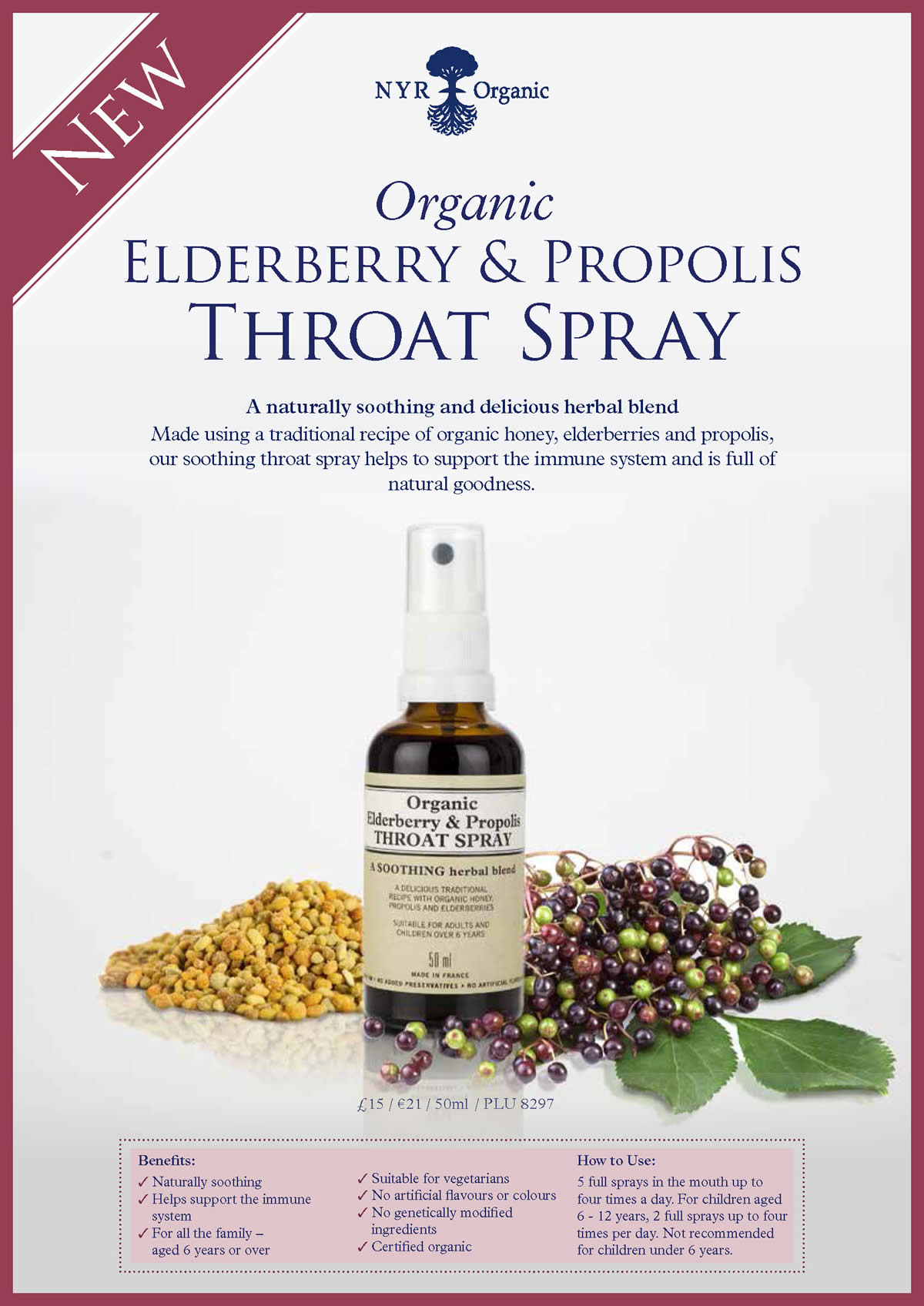 Having suffered from a very sore throat throughout the Christmas period, I can highly recommend this throat spray to soothe the symptoms! There is currently 20% off this product, £12 instead of the usual £15.

The benefits are as follows:

You can buy it in the shops, on-line or here Elderberry Throat Spray 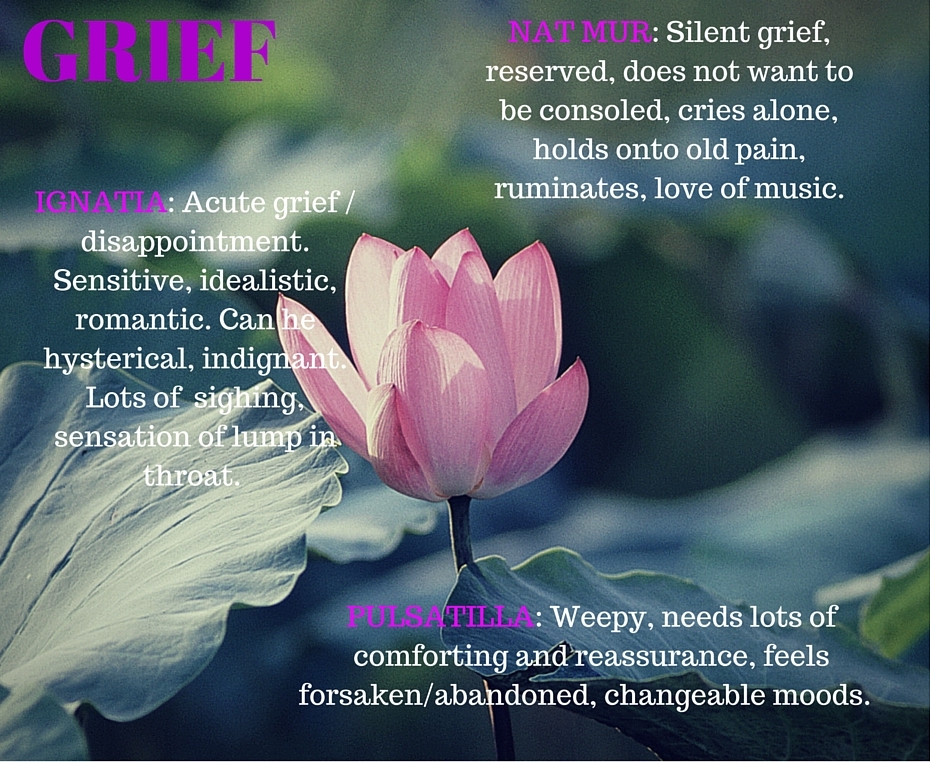 I am delighted to have joined the Yew Tree Clinic Team this month. This clinic is set close to the heart of Westbury-on-Trym on Stoke Lane, and was set up by the fantastically talented Claire-Howard Robinson. She qualified as an osteopath in 1992, and set up the Yew Tree Clinic in 2001 with the aim of bringing together a team of osteopaths and other health professionals, in order to create a clinic with a truly holistic approach to health.

I will be there every other Friday. Please feel free to contact me for further details or drop in to the clinic for an informal talk about how homeopathy can support you and your family’s health. 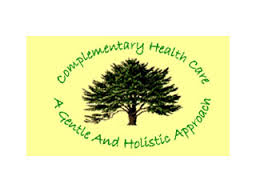